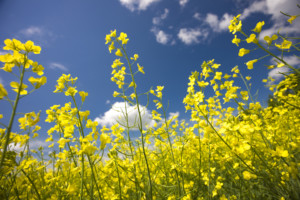 Canola is a crop with plants from three to five feet tall that produce pods from which seeds are harvested and crushed to create canola oil and meal. These plants also produce small, yellow flowers, which beautify the environment.

Canola seeds contain about 45 percent oil. This large percentage of oil comes in a small package; canola seeds are similar in size to poppy seeds, though brownish-black in color.

Although they look similar, canola and rapeseed plants and oils are very different. Canadian scientists used traditional plant breeding in the 1960s to practically eliminate two undesirable components of rapeseed — erucic acid from oil and glucosinolates from meal — to create “canola,” a contraction of “Canadian” and “ola.” Canola oil is prized for its heart-healthy properties with the least saturated fat of all common culinary oils.

Canola belongs to the Brassica plant family as does mustard, broccoli, Brussels sprouts and cauliflower. Besides the United States, canola is grown in Canada and Australia as well as in Europe and China (but the crop is called “double low rapeseed,” referring to its low levels of erucic acid and glucosinolates, in the latter two countries). In America, the ratio of supply versus demand of canola oil is about 1:4, which presents a huge opportunity for U.S. producers to grow more canola. The healthy oil from this crop is consumed all over the world and number three by volume among edible oils.

About 2 million acres of canola are currently grown in the United States, predominantly in North Dakota, but also in Minnesota, Oklahoma, Kansas, Texas, Montana, Idaho, Oregon, Washington, Kentucky and several other states.

What is Canola Oil?

Courtesy of the Canola Council of Canada